A Prayer for Japan: New Works by Ed Heckerman 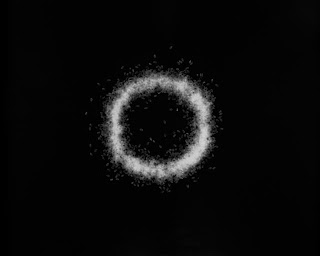 The rice used in Glocal was gifted to the artist from numerous sources affected by the 2011Japanese earthquake, tsunami and nuclear plant disaster.  Heckerman simultaneously achieves the production of art through spiritual practice, as well as collaboration, allowing for resurgence and an address of ethical problems within photography.  Heckerman writes, “The new 'offerings' are a prayer for Japan.  This series is called Glocal, a reference to 'glocalization,' a relatively new word referring to individuals and communities that ‘think globally and act locally'."

Within each project the artist arranges symbolic materials on light sensitive paper to produce a photogram or camera less image in the wet darkroom.  These works are cohesive through Heckerman’s insistence on giving a picture as opposed to taking a picture. It is within this act that Heckerman addresses photographic ethics.  By making and offering an image to his viewers, Heckerman avoids the sometimes exploitative and voyeuristic nature of photography. The persistence of these projects over a decade’s time is admirable; the artist successfully broadens the conversation with each new body of work.

Heckerman labels Glocal a collaboration.  This collaboration came about through the process of Heckerman’s checking in on the well being of his friend, Iwauko Murakami during the 2011 earthquake, tsunami and nuclear crisis.  In a correspondence (included in the exhibition), Murakami expresses her desire to produce an artwork for her hometown during the aftermath of the tragedy.  She also describes her frustration of not being able to immediately produce work due to the overwhelming sorrow felt throughout her community.  In describing the nuclear accident in an e-mail to Heckerman, Murakami writes,


"…I don't know whether this situation will be settled on safety or not…The nuclear accident brought an image that radioactivity has polluted Japan islands to people all over the world. I guess this image will prevent Japan from revival. Rice is [an] important provision for the Japanese. However, if pollution expands as it is, we will lose our provisions.  If damage…occurs to rice farm[s], the influence is a vital issue for us.  Your work, "[G]lobal" just corresponds to it. By chance, that work looks like a radiograph, used by radiation. I think  '[G]lobal' can refer to this problem to which Japan is facing… Japanese choose rice by sticking to a brand made in their hometown. Thus, the culture of rice diet is very deep for the Japanese.  There are many brands of rice in the stricken areas. For example, HITOMEBORE, SASANISHIKI, AKITAKOMACHI, and so on…[What] do you think [of] my idea that you make new works by using rice of Japan in order to pray for Japan?"

Murakami and thirteen of her friends each sent Heckerman a bag of Japanese rice.  Heckerman honors the collaborative effort of these individuals through the titling of the images. Each work’s title is composed of a list of three components:
1) The place in Japan the rice was produced
2) The kind of rice
3) The first name of the person or people gifting the rice to the artist

Seven photograms printed on 16” x 20” paper, matted square with circular windows are installed in one level line at Bolivar 2.0 in Santa Monica.  Accompanying the seven works is an additional piece, a long, narrow montage of each enso form archivally printed on Moenkoepi Kozo Mulberry paper.   The eye-catching images draw the viewer inward.  If one gives in to the hypnotic force a reward of subtle visual differences become recognizable within the interior of the few grains of rice that have fallen away from each enso mass which holds their unique textural forms.  Additionally, as recognized by Murakami, the photograms take on an eerie quality suggesting a visual face for the invisible, that which is radioactive.

While visiting Bolivar 2.0 be sure to indulge in the tasty arepas, a corn-based dish from the northern region of South America.  Each arepa bun is partially sliced and filled with your choice of delectables ranging from fresh ripe mangos, avocados and cheese with a garlic rosemary aioli to a pulled pork shoulder cooked in Caribbean spices for eight hours. Wash your arepa down with a highly addictive frothy fresh squeezed Tres en uno carrot, beet and orange juice which is simply the most beautiful color your lucky eyes will ever see. 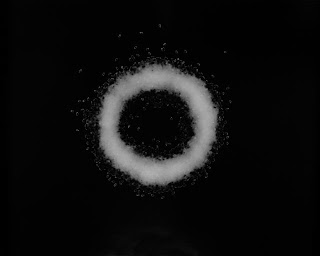 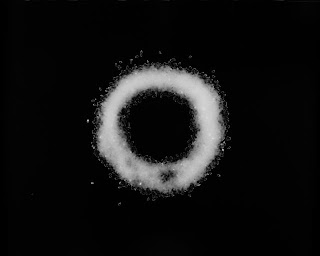 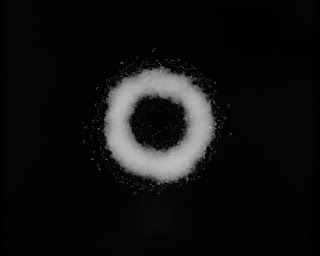 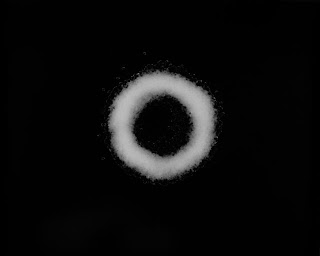 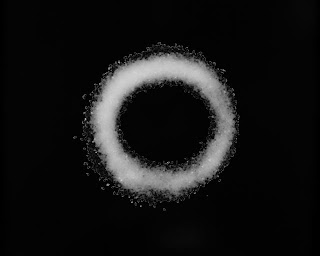 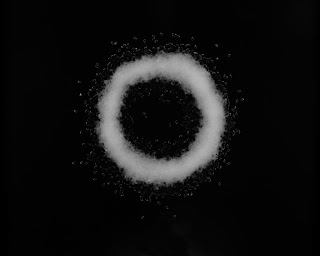