Landscape of the Dining Table 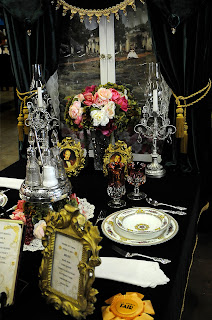 Perhaps you do not fancy fried fair food.  No need to worry, the county fairy offers a bountiful range of all things gastronomic including wine, beer and olive oil tastings, Daisy’s Education Barn (a cow milking parlor) and the Culinary Styles Contests.  Fair competitors can strut their culinary style in over 30 competitions including: sugar art, the perfect reception cake, all American Pie contest, Shelton’s Leftover turkey main dish contest, the almost homemade contest and tablescaping.

The 2012 tablescaping competition includes four subcategories: Celebrate Invention, Design on a Dime, Bring on the Books and Imagination, where in participants set a dinner table 40” x 60” in size for at least two guests for first course dining only; with glasses and utensils for all courses.  Entitling the competition, “Tablescaping”, as opposed to the simple title of “Table Setting” is interesting to note.  The term tablescaping brings attention to the suffix “scape,” referring to form, a scene, or specific type of space like landscape, a space much wider, vaster and more monumental than the domestic dining table. And monumental tablescaping is, so monumental in fact the 2001 Tablescaping competition is the subject of artist Judy Fiskin’s 2003 video “50 Ways to Set theTable.”  The 28 minute documentary explores the annual table setting competition, including the highly subjective process of two judges evaluating and awarding the tables set in six categories: Valentine, Magic, Sports, Lion King, Vineyard and Country Christmas.  In an opening scene, the judges declare a string of decorative beads as detracting from elegance due to the fact that the craft beads do not hang straight.  This dialogue juxtaposed with a detail of the two sets of judges shoes, both far from elegant, more sensible in fact, including a pair of orthopedic work boots reveals the humor consistent throughout Fiskin’s practice.  The more opinionative of the two female judge's goes on to suggest the beads used should have been long strands of Jackie Kennedy pearls.  The Jackie Kennedy reference and attempts at Emily Post perfection shifts the viewer’s sense of time to previous decades of domestic perfection.  In our contemporary era of the decline of formal white table cloths and fine dining, it is utter fascination to view a subculture preoccupied with fetishistic, elaborate, over the top table settings. Through her exploration of domestic crafts, Fiskin comingles high and low culture, revealing numerous commonalities such as the critic.  Perhaps the most revealing point in the film occurs when the two judges can’t agree on which table should be awarded best in show. A judge confronts the camera operator seeking a third opinion.  The camera shifts with unease as the other judge carries on, dismissing any opportunity for the camera operator to comment.  The interaction, a Brechtian moment, simultaneously reveals the transparent view of each party on either end of the camera.


The diner-less tables sitting within the convention showroom lit with industrial fluorescents reveal a kind of sadness.  The melancholy of it all would likely be lifted were the works to become utilitarian.  Perhaps a brave fair goer might sit at this year’s best in show table with a plate full of fair grilled BBQ.  Others inspired by their newfound table setting etiquette, may ask themselves just what will I serve at my “Design on a Dime” inspired banquette?  Consider consulting both the LA County Master Food Preservers for food preservation demos on the Culinary Styles Stage and the LA County Master Gardner’s at Fairview Gardens.

Judy Fiskin’s solo exhibition "The End of Photography and Selected Photographs" will be on view at Greenberg Van Doren Gallery in New York from September 12 - October 27, 2012.
Posted by Amanda Keller Konya at 3:21 PM